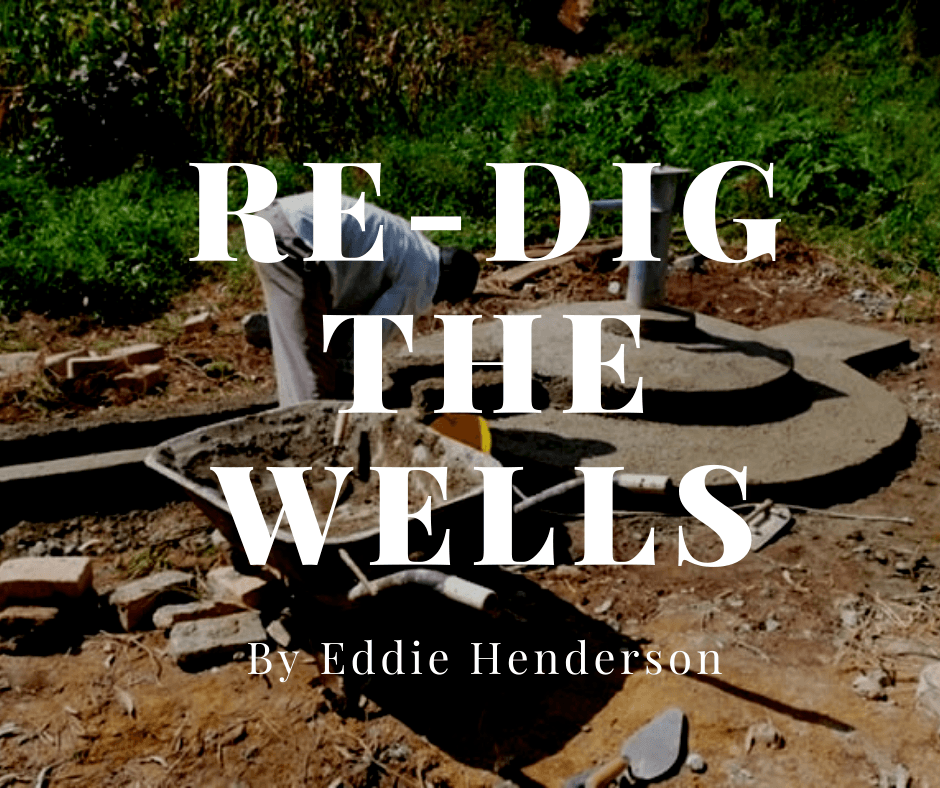 Re- dig the Wells

This may be a time whilst we go through this new series ‘The Holy Spirit’ a season we’ve entered into for a fresh flow of the Holy Spirit in our lives. Over these weeks ahead it might be the best opportunity we’ve had in a long time to take stock of our spiritual condition and seek after a fresh flow of the river of God to come again bringing that refreshing and newness. This is a time when all Christians could position ourselves to “re-dig the wells”.

As you know I’ve been involved with digging wells in Uganda for some years and have a desire to see many wells being dug supplying fresh drinking water to many because Safe water Save lives. 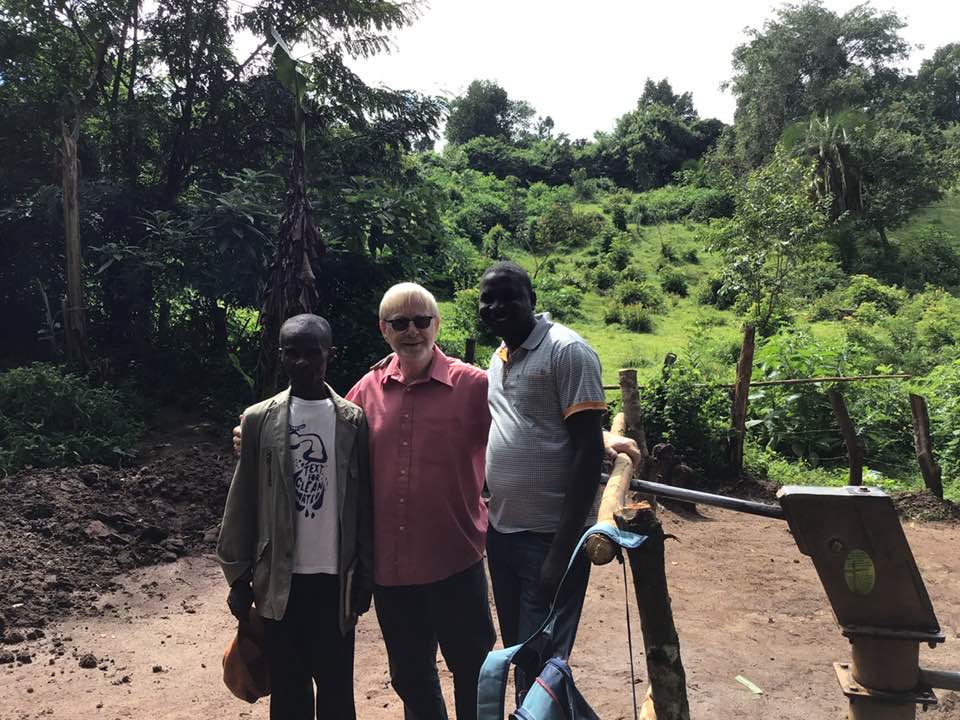 I was in a place called Ddwaniro in the Rakai District of Uganda when God spoke to me about broken wells and about re-digging wells both in the natural & the spiritual sense, and we’ve endeavoured to do this ever since (it was here that I felt that at each well we dug we should leave behind an invitation to all who came to draw from the natural water the promise of the spiritual water source John 4:14 (John 7:37-39)

“But whoever drinks from the water that I will give him will never get thirsty again— ever! In fact, the water I will give him will become a well of water springing up within him for eternal life.” “Jesus stood up and cried out, “If anyone is thirsty, he should come to Me and drink! The one who believes in Me, as the Scripture has said, will have streams of living water flow from deep within him.” He said this about the Spirit, whom those who believed in Him were going to receive.”

It’s been a delight to report that we have seen this happen on a number of occasions indeed recently at a well we had just repaired two men came along & read this very scripture & asked the pastor of the local church who was there to inspect the repairs what it meant and after a time of sharing the Scripture they were both led to Salvation in Jesus Christ…hallelujah. 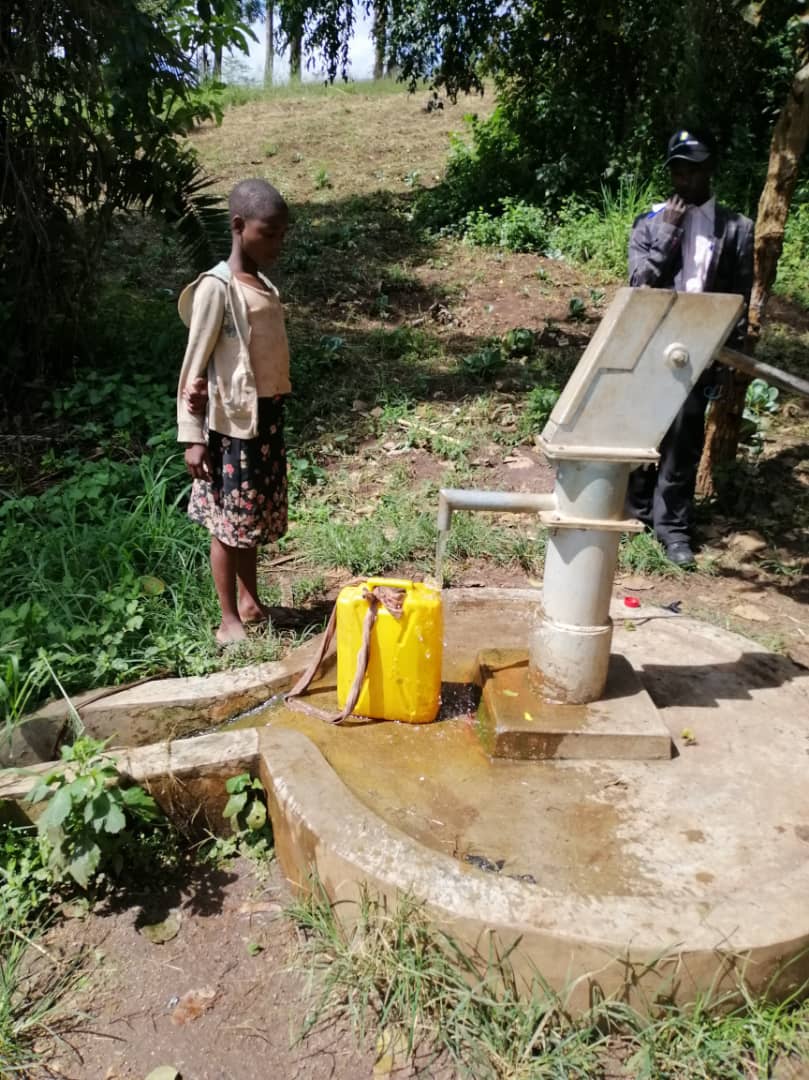 Opening the wells Genesis 26:18-22 Isaac reopened the wells that had been dug in the time of his father Abraham, which the Philistines had stopped up after Abraham died, and he gave them the same names his father had given them. Isaac’s servants dug in the valley & discovered a well of fresh water there but the herdsmen of Gerar quarrelled with Isaac’s herdsmen and said, “The water is ours!” So he named the well Esek, (means dispute) because they disputed with him. Then they dug another well, but they quarrelled over that one also; so he named it Sitnah (means opposition) He moved on from there and dug another well, and no one quarrelled over it. He named it Rehoboth, (means room) saying, “Now the LORD has given us room and we will flourish in the land.”

Wells are the way We access water, Christians have access to “Spiritual wells” = Time in the Word, Time in Prayer, Refreshing Fellowship, Worship & Filling of the Holy Spirit. Isaac needed life-giving water to survive in the land but the Philistines (the enemy) had stopped the flow of water from the wells by filling them in. To get to the vitally needed water supply, Isaac had to work hard to re-dig the wells and overcome what the Philistines had done.

Sadly, we’re in the same situation today, Philistines (the enemy in many forms) has greatly affected the water supply (e.g the life-giving water of God’s Word) by coming along & has filled in the wells & it’s adversely affected the flow of water. The Philistines stopped up all the wells that his father’s slaves had dug in the days of his father Abraham, filling them with dirt Gen.26:15 Here we have a picture of how we can allow Satan, the world, or sin to “stop up our wells” and not let the Rivers of Living Water Flow in & through our lives(this flow should affect others around us)

We need water to survive, water is so important in the Christians life, without water it’s so dangerous.  Let’s have a wee look at something here; Dehydration causes Dryness and the loss of flexibility in the skin. Disorientation, loss of balance, stumble easily all bodily functions are impaired renal failure: (the body can’t cleanse itself of impurities) Skin can become flaky and shed: loses its attractiveness!

“Spiritual” Dehydration causes dryness our spirit becomes dry and we don’t feel the presence of God as we once did. …….Loss of flexibility in the skin: we become bitter, unyielding, and graceless. Disorientation: we lose sight of our vision and where God is leading us.  Spiritual”Dehydration causes loss of balance, we stumble easily we get caught in sins we used to have victory over. All bodily functions are impaired: no longer enslaved to the Spirit but to our flesh.

Spiritual” Dehydration causes Renal failure (the body can’t cleanse itself of impurities) harder to repent of sins. Skin can become flaky and shed – loses its beauty people don’t see Christ’s beauty in us as they did previously and aren’t drawn to Christ. 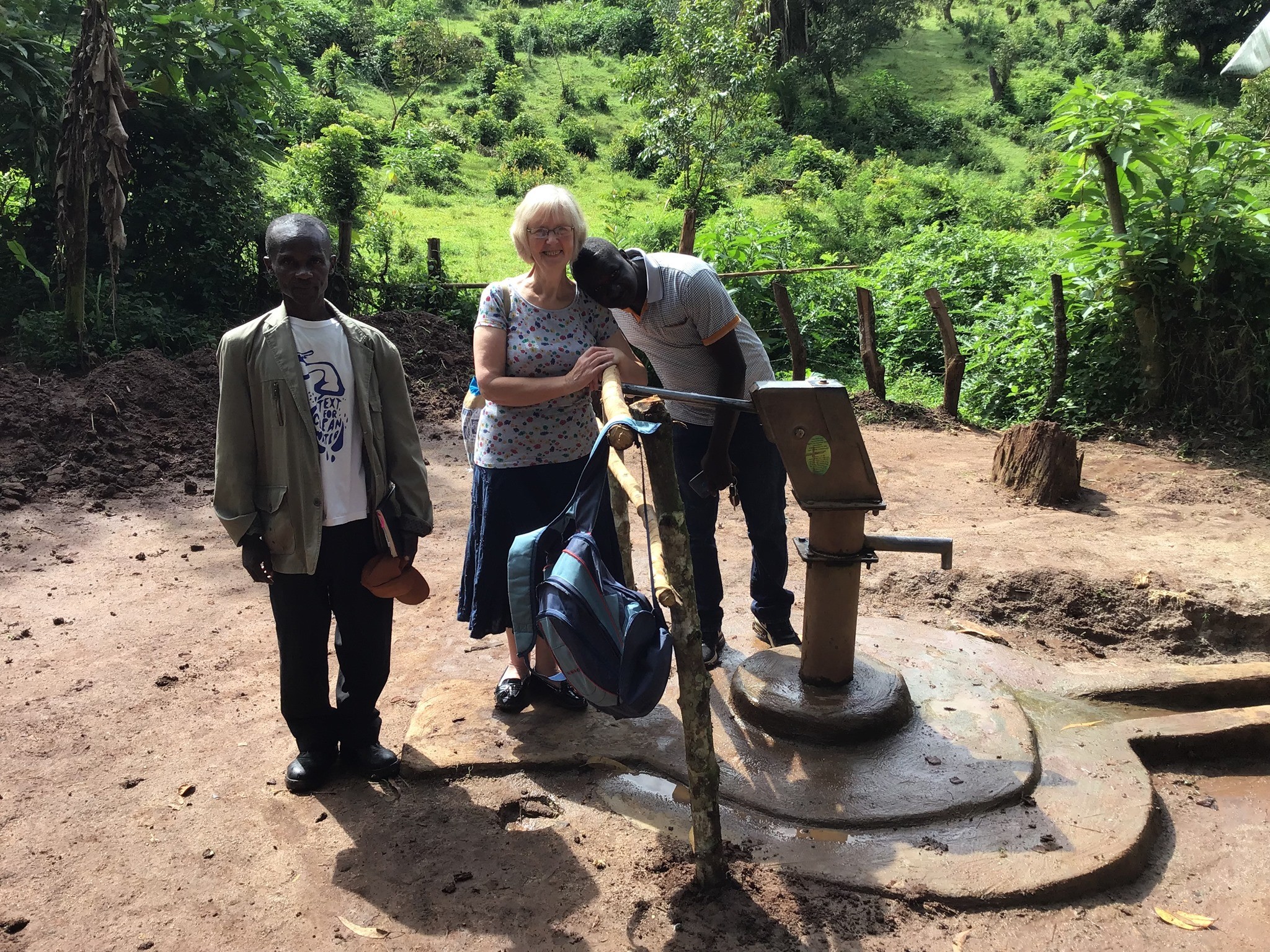 Isaac reopened the wells that had been dug in the time of his father Abraham, which the Philistines had stopped up after Abraham died, (Gen.26:18)  We must be like Isaac and determine to “re-dig” our wells to experience God’s Living Water again in a vibrant way. Maybe we need to get our sleeves rolled up to re-dig some idle wells. When well-digging, you can expect resistance disputes and opposition but greater is He within you than he that is in the world.

Do Remember, Wells are the way We access water (refreshing) Christians have access to “Spiritual wells” Time in the Word, Time in Prayer, Time in worship, Refreshing Fellowship & (Re)In Filling of the Holy Spirit:

This is a time when Christians must re-dig the wells. Re-dig the wells that have become stopped up (for whatever reason) its time for you & me to re-dig the wells in our lives that at one time ran freely & where others could even come to drink from & be a blessing to others. Let’s stop allowing the enemy freedom to come and stop up our wells. Let’s be determined today to be more than a conqueror…..you may be surprised to see that it doesn’t take much to get back into the flow again.

If Satan, the world, or sin have “stopped up your wells” then spend Time in the Word, Time in Prayer, Time in worship, Time in Refreshing, Fellowship Time being filling with the Holy Spirit .  And experience: LIVING WATER!

Step out in faith.  There was a man who got lost in the desert. After wandering around for a long time his throat became very dry, about that time he saw a little shack in the distance. He made his way over to the shack and found a water pump with a small jug of water and a note. The note read:

Now the man had a choice to make, if he trusted the note and poured the water in and it worked he would have all the water he needed. If it didn’t work he would still be thirsty and he might die. Or he could choose to drink the water in the jug and get immediate satisfaction, but it might not be enough and he still might die.

After thinking about it the man decided to risk it. He poured the entire jug into the pump and began to work the handle, at first nothing happened and he got a little scared but he kept going and water started coming out. So much water came out he drank all he wanted, took a shower, and filled all the containers he could find.